"Spectacular. Ominous from page one, tense all the way through, explosive at the end, Device Free Weekend does everything a great thriller should—and a lot more, too. It makes us think about how we live now, and the extra dangers we have created for ourselves."—Lee Child, #1 New York Times bestselling author of the Jack Reacher series
“Device Free Weekend is aptly titled. Once I met this rich cast of characters—college friends mysteriously reunited on a rich tech mogul’s private island—I immediately wanted to avoid all distractions and lose myself in this smart, propulsive thriller. Sean Doolittle continues to be one of the most clever and creative crime writers working today.”—Alafair Burke, New York Times bestselling author of Find Me

"If Patricia Highsmith and Nelson DeMille and Alex Michaelides somehow united for a three-way collaboration, Device Free Weekend might be the explosive result. A breathtakingly clever, twist-filled thriller that feels exactly right for a weekend getaway. Sean Doolittle always writes the coolest characters. If it wasn’t so dangerous, I’d want to spend time on a private island with these people!"

—Blake Crouch, bestselling author of Dark Matter and Upgrade
"Brutally clever and action-packed, Device Free Weekend is also a wry, warped tale of the tech-heavy world we live in. And it's truly impossible to put down. Pick this one up and you'll wind up spending a weekend without devices … or sleep."—Alison Gaylin, bestselling, Edgar Award-winning author of The Collective
"Dramatic, deadly, and occasionally funny . . . a creatively madcap adventure. Fans of TV’s The White Lotus will find a lot to like."—Publishers Weekly
“Imagine a gritty, hyper-realistic version of The Glass Onion chock full of philosophical inquiries about the consequences of social media, and you’re getting close to what Sean Doolittle has pulled off in his latest novel, Device Free Weekend. Part techno thriller, part love letter to the 90s—Device Free Weekend is the book we’ve all been waiting for.”
—Eli Cranor, author of Don’t Know Tough and Ozark Dogs
PRAISE FOR SAFER
"Safer is a high-octane, rip-roaring page-turner. I read it in one sitting—and loved every minute."—Harlan Coben
“As long as there are writers like Sean Doolittle out there, American crime fiction has got a sterling future ahead of it.”—Dennis Lehane
PRAISE FOR SEAN DOOLITTLE
“A cult writer for the masses–hip, smart and so mordantly funny. Get on the bandwagon now.”—Laura Lippman
"Sean Doolittle is a young writer with serious chops."—George Pelecanos
"A wonderful discovery."—Michael Connelly
"One of the best crime novelists working."—Owen King
Read More Read Less 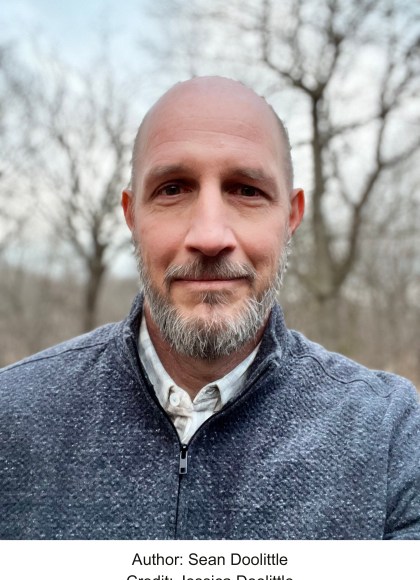 Sean Doolittle is the critically-acclaimed author of eight standalone crime and suspense novels. His books have received the Barry Award and the International Thriller Writers Award, among other honors, along with praise from Dennis Lehane, Laura Lippman, Michael Connelly, Harlan Coben, Lee Child, and other respected authors in the genre. A native of Nebraska, he lives in western Iowa with his family. You can find him online at http://www.seandoolittle.com.
Discover More

It hadn’t occurred to Stephen Rollins that buying an island was something that anybody, even your old college roommate, could go out and do.

Beau and Lainie said sure, why not? It’s just real estate. There were websites. Will and Perry claimed to know a couple who’d bought their own ghost town, and those people weren’t even all that wealthy. Not Ryan Cloverhill wealthy, certainly. Not cover-of-Time-magazine people, just regular ones.

If he was honest, Stephen supposed he’d never quite fully grasped, even after all these years, that Ryan was cover-of-Time, own-your-own-island people. This was the same Ryan Cloverhill who’d mistakenly filled their apartment dishwasher with regular Dawn and flooded the kitchenette with suds.

And he’d invited them all for Labor Day weekend: Beau and Lainie, known internally as Blainey; Will and Perry, known as Will and Perry; Emma, of course.

And Stephen, who’d spent the last month gravitating between opposing poles of delight and terror. He loved them all, his oldest and dearest friends. But when had they last spent any real time together in person, in the same place, all seven of them? A decade ago?

“It’s a fair question,” Will said on the phone. “But worth the risk.”

Perry agreed: “Get your ass on that plane, Rollie. The pleasure of your company is cordially required.”

Blainey—predictably—seemed fixated on the numbers. “What did Will and Perry get?”

“A four and a five,” Stephen told them. “I don’t remember who got which.”

“I got three,” Lainie joked from the other line. “You got six.”

They’d been referring to their invitations, delivered earlier that week by private courier: heavy linen cardstock, clean Neutraface lettering, the geometric four-leaf insignia Ryan Cloverhill now used as a personal colophon. On the back of Stephen’s, in a splash of glitz that didn’t quite fit the minimalist design: a large numeral 2 stamped in silver foil.

“I’m sure it’s not a personal ranking,” Stephen told them.

Beau laughed. “Easy for you to say, number two.”

“Anyway,” Lainie said, “I guess we know who number one is.”

Stephen never did manage to connect with her, somehow.

At least not until Denver International, a dozen weeks later, when they found themselves hopping the same connecting flight to Seattle. It was Friday morning, thirty minutes before takeoff. Stephen had completed the list of tasks required to leave his entire life and business in Chicago behind for four days, which consisted primarily of setting out extra food and water for the cat and locking the door to his apartment. The big weekend had arrived.

He saw Emma before she saw him. Stephen waited until she came within earshot, then said, “Of all the boarding gates in all the airports.”

Emma Grant looked up, locking immediately on the sound of his voice. She’d been in hustle mode, joining the queue a touch on the late side, fighting with the zipper of her carry-on with coffee in one hand, her phone in the other.

The sudden wattage of her smile hit Stephen with enough force to make his heart stutter; she laughed and headed straight for him, arms outstretched. It looked almost as though she were offering him coffee and an iPhone. “Do you really see yourself as the Humphrey Bogart of this airport?”

“Good point.” He stepped out of line to meet her, buzzing with adrenaline. He wasn’t prepared yet. “Ryan probably owns it already.”

“Come here,” she said, and they were hugging tightly, awkwardly, all shoulder bags and elbows and handheld accessories. She smelled like Cinnabon and felt just like Emma; Stephen’s head swam a little as she planted a fat kiss on his cheek. “It’s so good to see your face. You asshole.”

“I should dump it on your head. Let me look at you.”

“Then let me hold something.”

She handed him the coffee, finished situating her bag, then laid her free palm on his cheek, shaking her head in wonderment that seemed to border on anthropological. The guy at the counter called the first group onto the plane, and people around them started to move. “Stephen Adelaide Rollins.” She scratched at his temple. “The gray looks good.”

“I always had a thing for your dad.”

“Speaking of Ryan,” he said, “obviously we have our illustrious host to thank for this meet-up. I’m 3C. Where are you?”

“I guess we should have known.” Ryan had taken care of everybody’s travel arrangements. Or had an assistant book it, more likely, but there must have been specific instructions involved. Leave it all to him, he’d said. You guys just do the getting here.

“We would have known,” Emma noted, “if you’d returned any of my calls.”

“Shall we?” he said, gesturing toward the first-class line already trundling into the jet bridge.

They joined the procession, boarded the craft, and stowed their bags in the overhead bins. After settling in to their nice wide seats with extra padding and plenty of legroom, Emma looked over and said, “Hey. What number did you have on the back of your invite, anyway?”

They touched down at Sea-Tac at 12:37 p.m., already swapping stories like a pair of old thieves, perhaps the teensiest bit loopy from the in-flight transition from coffee to Bloody Marys somewhere over the Idaho Rockies.

Emma had relocated back to the Twin Cities after her divorce, which Stephen had known; she’d taken a new job last winter—general counsel to a mid-size biotech firm in Minneapolis—which he should have known but didn’t. Her son had started his freshman year at Vassar this fall. It was no Bardsley, haha, go Badger Hounds.

Stephen was still doing his thing in Chicago. Never married, no kids, which she already knew; not seeing anybody seriously at the moment, which she pre-tended not to know (though he felt reasonably certain that Will and/or Perry had probably been keeping her updated). It didn’t seem important to observe the sad truth aloud: a six-hour drive, or a cheap ninety-minute flight, was really all that had stood between the two of them and a visit these past few years. But they’d always been good with unspoken agreements, him and Emma. Why lament missed opportunities when here they were now?

At baggage claim they were met by a lean, densely muscled fellow in a black T-shirt and aviator sunglasses holding up a sign that read “1 & 2” in sparkly silver glitter.

“Seriously, what’s the deal with the numbers?” Stephen asked him. “Do you know?”

The guy grinned. “You must be two.”

“We call him the Deuce.” The Bloody Marys had been Emma’s idea.

“Mr. Cloverhill asked me to play this for you.” The guy tapped the screen of his own phone and held it out for Stephen and Emma to see. On the screen, an animated green Wicked Witch of the West croaked All in good time, my little pretty, flipped him a double bird, blew a raspberry for good measure, then dissipated in a puff of cartoon smoke.

“My name’s Junipero. Call me Jud. The others should be on-site any time now. Barring the unexpected, you’ll be joining them right on schedule.” He took their suitcases, one in each hand, his sign tucked under one arm. “All set, then?”

The schedule, as Stephen understood it, began with a 2:00 p.m. muster at Link Village, Ryan’s waterfront office complex in South Lake Union. A light lunch, followed by a one-hour campus tour, ending in a ferry ride to Sham Rock, which was—of course—what Ryan Cloverhill would name his personal island.

He’d be awaiting their arrival, great-and-powerful-style, at the weekend home he’d built himself there. There would be preparatory cocktails, followed by a sunset cruise around the island aboard Ryan’s VanDutch 55, piloted by Ryan himself. Then a chef-prepared meal, at which point, Stephen presumed, they would work together as a group to become properly shit-faced. It was to be a long, lazy, device free weekend: a chance to unplug, catch up, and enjoy one another’s company for the first time in far too many years, free from the kinds of digital distractions that had purchased all of this in the first place.

“We’re all yours, Your Judness.” Emma looped her arm through Stephen’s. “Show us the yellow brick road.”